“So, I signed up for this 2-hour professional development class called “Control Your Chaos” and I thought it would be really good for me to control my chaos, so I show up and all they wanted me to do was BREATHE!” my sister-in-law paused. To breathe. I just looked at her, not saying anything. “I’ve been breathing my whole life- why should I take a class for breathing? I thought I was going to get help controlling the chaos in my life!”

Again, I didn’t say anything.

My sister-in-law is brilliant and funny, and need I say, a little stressed out by the chaos in her life. Mindfulness could certainly help her, but I wonder if a 2- hour class is enough?

Would it be enough for any of us? 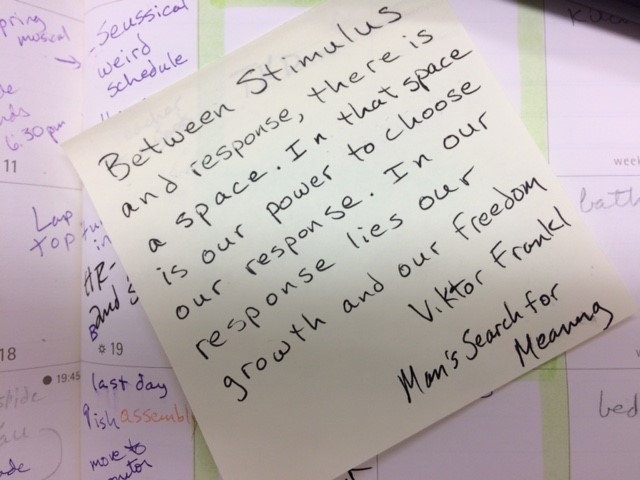 Most of the people I know have so much going on in their lives, so many balls in the air, so many plates spinning, that taking a moment to breathe seems impossible. We are at a constant state of alert, with adrenaline and cortisol flooding our systems all the time. We receive a stimulus, and respond instantly, we feel we have to, because another stimulus will follow immediately. We struggle to take that space, where we can choose our response.

Maybe you have been breathing since you were born, as my sister-in-law pointed out, but maybe you’ve gotten into the habit of breathing shallowly, fast. Every once in a while, you need more oxygen, so the brain sends a signal to yawn. Or, too much waste gas is building up, so you sigh.

These signals are not conscious- they are part of the autonomic nervous system, the same system that controls heart rate, hormone production and digestion. You don’t have to consciously pay attention to digesting the food you just ate, and in fact you couldn’t if you tried. . Consciously send a message to your gut to digest. Go ahead, try it, I’ll wait.

However, you can consciously control your breath, and doing this can affect other elements of the autonomic nervous system.

An example- I just had a power struggle in math class with a 6th grade girl. One of the mean ones. I can give her directions and she just looks at me with narrow eyes and moves very slowly. She eventually complies with most of what teachers tell her, but there’s always a lot of rolled eyes and hands on hips. It is the kind of thing that drives me absolutely crazy. It is part of the chaos that I wish I could control.

But the only thing I can control is my own reaction.  I can practice taking charge of the space between the stimulus: the rolling eyes, and my response: “DON’T YOU ROLL YOUR EYES AT ME YOUNG LADY!”

Hmmmm…maybe try again. Stimulus -rolling eyes Response -breathe in, letting my belly go out a little to fill up the very bottom of my lungs, breathe out slowly, then inhale again and ask the young lady’s neighbor if she understands what to do. Then I help explain how to figure out the area of a trapezoid.

By controlling my breathing, slowing down consciously, I start a cascade of reactions. Slow breathing can signal my adrenal glands that this battle for control with a mean girl is not life threatening. My heart rate slows, no adrenaline, no cortisol. It helps me catch this ball that’s falling, give that spinning plate another flick. It’s chaos, but it’s a little bit more under control.

Welcome to the rough draft of my brain. Well, second draft. Most photos here are by me, other than the really good ones, which were taken by my husband.

When we went to Memphis this fall, I was incredibly moved by the Civil Rights museum, at the site of the Lorraine Motel, where Dr. King was shot. Be the light in the darkness. #mlkweekend
On the 10th day of Christmas...I took a ride on my new bike that my true love got for me. #forgotmymittens #teamfuji
Historic ski passes- same pink puffer coat, little bit of a crazy-eye look there in ‘78. #skicooper
You guys should smell this soup.
Forgot to get a picture of the bird when it came out of the oven, so here’s the plate with everything. #christmas #spatchcockturkey
I’ve got a new blog post up, about our book and how awkward it is to ask people to buy it. With that in mind, please buy our book... link in the bio #coloradoyogaing #musingsofayogacommunity #buymybookplz

Where can you take my class?